By the 1990’s the extraordinary impact of the Green Revolution is undeniable. Food production rose dramatically, on much the same land area as was in agricultural use before the Green Revolution. Great swaths of forested and environmentally fragile land were saved from the plow. Norman, a forester and naturalist at heart, is rightly credited for much of this preservation; he is intensely proud of saving forested lands.

Conditions for success in India and Pakistan, like organized economies, transportation and irrigation systems, are lacking in much of Africa. Despite these obstacles Norman and the SAA move forward. In 1994, former President Jimmy Carter gets Ethiopian Prime Minister Meles Zenawi’s support for a campaign to aid farmers. They use diammonium phosphate as inorganic fertilizer and Borlaug's methods. The results are the largest harvests of major crops in Ethiopian history. This demonstrates there is hope for sub-Saharan Africa. Norman continues, until his death, to try and ease the plight of African farmers.

The Rockefeller Foundation’s Archives contain many materials on Norman Borlaug and the entire Green Revolution. Learn about the the Mexican Agriculture Program. Operated from 1943 to 1965, it is now credited with launching the global transformation known as the “Green Revolution. 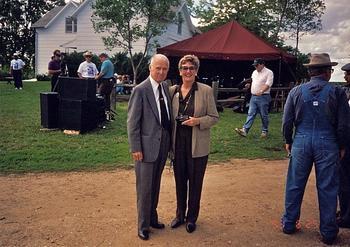 The University of Minnesota Archives

1999 - With help from his old Minnesota graduate school friend Al Moseman and from Ms. Sue Shepard, a University of Minnesota Development Officer, Norman donates a major portion of his early career

Norman sends other, later materials, to Texas A & M University’s Library Archives, some of which are online.

2003 - Norman visits Kenya and Uganda and sees a new race of wheat stem rust disease that can attack the genetic resistances he and his collaborators put into wheat since the 1960’s. He immediately spreads the alarm since 80% of all wheats grown are again susceptible to wheat stem rust. That ancient enemy has mutated and is back with a vengeance; as always stem rust evolution continues. The USDA Cereal Disease Laboratory on the University of Minnesota’s St Paul Campus confirms Norman’s diagnosis. This new race menace is called Uganda 99 or Ug99 since it was first noted in Uganda in 1998-99. Soon another group of equally virulent races also arises.

An international effort sponsored in part by the Bill and Melinda Gates Foundation steps up and thus was the Borlaug Global Rust Initiative created and formalized in 2008. Many international collaborations are made and over 1000 scientists are involved. These include key participants from the University of Minnesota and the USDA-ARS Cereal Disease Laboratory on the Saint Paul Campus. There is now an all out international effort to replace and strengthen the genetic resistances to not only wheat stem rust but also to wheat stripe rust and wheat leaf rust - all of which are causing losses in wheats with the Green Revolution rust resistances which are now susceptible.

Norman's Many Awards and Accolades

2002 - Norman receives the Public Welfare Award from the United States National Academy of Science (NAS). It is the NAS’s most prestigious award.

2004 - The State of Minnesota designates October 16th of every year as Dr. Norman E. Borlaug World Food Prize Day in Minnesota. A similar designation was made in 2002 in the State of Iowa. Norman is also enshrined as a figure in the stained glass Peace Window of St. Mark's Episcopal Cathedral in Minneapolis, Minnesota, USA.

2005 - The President of the United States presents Norman with the National Metal of Science.

2006 - The Congress of the United States of America presents Norman it’s highest civilian award, Congressional Gold Medal. It is presented only to those "who have performed an achievement that has an impact on American history and culture that is likely to be recognized as a major achievement in the recipient's field long after the achievement."

At that moment Norman Borlaug, Mother Teresa, Nelson Mandela, Elie Wiesel, and Martin Luther King Jr., are the only five people to have been awarded the Nobel Peace Prize, the Presidential Medal of Freedom, and the Congressional Gold Medal.

2006 - Dr. Leon Hesser an economist friend of Norman’s publishes the official biography of Norman Borlaug entitled "The Man Who Fed the World." Norman and Leon visit Minnesota and both make presentations at the Cargill Building of Plant and Microbial Genomics on the Saint Paul Campus.

Also in 2006 Norman shares his recollections of coming to Minnesota and Plant Pathology at Minnesota with Professor Richard Zeyen. The recollections are recorded for posterity.

Attending the 2007 Centennial for Plant Pathology at Minnesota

2007 - Norman, although suffering from lymphoma, returns for the Department of Plant Pathology’s Centennial Celebration. This celebration is held on September 18 through 21 on the Saint Paul Campus of the University of Minnesota. Norman is the guest of honor and is enveloped by the warmth of scores of friends from all walks of life; friends that include his ‘new-old friend’ J Robinson ( U of MN wrestling coach) Picture 6. A special edition of the Department’s newsletter, the Aurora Sporealis, documents this Centennial celebration.

No one lives forever, although Norman gives it his best effort. On September 12, 2009 Norman passes away at his home in Dallas, Texas. According to his daughter Jeanie Borlaug-Laube, Norman’s last words concerned the plight of African farmers. Norman considered his work in Africa unfinished and he had wanted more than anything to continue.

Many organizations and nations hold memorials to honor Norman; tributes pour in from around the world. Norman’s passing brings sadness but also a spirit of renewal for those who wish to continue his legacy. Read about the tribute from The Carter Center.

A memorial at the University of Minnesota

2009 - October 8, 2009 the University of Minnesota held a public memorial for Norman at the McNamara Alumni Center on the Minneapolis Campus. Among the many speakers are Ambassador Kenneth Quinn, President of the World Food Prize Foundation, Noel Vietmeyer, Borlaug biographer, and Judith Rodin, President of The Rockefeller Foundation. Hundreds attend the memorial service.

A monument to Norman by the Farmers of the Yagui Valley, Mexico

2010 - On March 25, 2010 Mexico dedicates a monument to Norman Borlaug in the Yaqui Valley (Professor Emeritus Richard J. Zeyen represents the University of Minnesota). The Yaqui Valley in Mexico is where generations of residents knew him as their great friend. Norman had said - "This is where I truly feel at home, and where I am at peace." It was his wish that his final resting places include this special valley. Thus, the monument and burial vault for his ashes are built on a plaza on the grounds of the Mexican National Institute of Forestry, Agriculture, and Livestock Research (INIFAP). The entire experiment station is renamed the Norman E. Borlaug Experiment Station and the Yaqui Valley farmers display a banner thanking Norman for helping them understand the value of research. Norman’s work had turned the Yaqui Valley into a prosperous region,

The location of the Borlaug Monument is on the winter breeding grounds for the International Maize and Wheat Improvement Center (CIMMYT). It is where Norman spent many years and accomplished the seemingly impossible. Surrounding this monument are the flags of 24 nations. These represent the principal countries where Norman Borlaug had the most impact.

2010 - The College of Food, Agricultural and Natural Resources (CFANS) in the University of Minnesota approves a center in the Department of Plant Pathology to help combat rust diseases of cereals. Soon the center will broaden its mission and become the Stakman-Borlaug Center (SBC) for Sustainable Plant Health.

2014 - On March 15, 2014 a bronze statue by the South Dakota artist Benjamin Victor is enshrined in Congress's Statuary Hall in Washington D.C. Each state in the Union may have 2 statues in the hall, Norman's is Iowa's choice. He is the only scientist in Statuary Hall.