Throughout his career and life Norman Borlaug sought to promote human welfare, not only through scientific and other contributions in agriculture but as a tireless spokesman and advocate for the impoverished and disadvantaged. As he gained prominence and visibility in the years after the 1970 Nobel Peace Prize he became a voice for those who had no voice. He never retired, his humanitarian endeavors continued until his death at age 95.

Late in his career, long after the Nobel Peace Prize recognition, the full scope of Norman Borlaug’s lifetime achievements in service to humanity was recognized by the National Academy of Sciences, which 2002 awarded him their highest honor, the Public Welfare Medal "for distinguished contributions in the application of science to the public welfare.”

Also, at White House and congressional ceremonies he was presented with the National Medal of Science (2006) and the Congressional Gold Medal (2007) respectively. These are the United State’s most highly regarded science and civilian honors.

Despite all of these unparalleled achievements and awards Norman Borlaug the man remained one of the most caring and humble of human beings. His last words before his death concerned the plight of African farmers, whose lives he had been devoted to improving for almost 30 years. 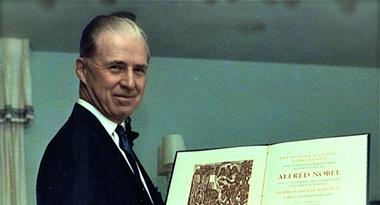 Watch Borlaug's speech given at the 2001 Nobel Centennial Symposia.