The Significance of Borlaug

Norman Borlaug was famous for his decades-long, science-based international agriculture improvement and educational efforts. His Mexican group’s work spearheaded ‘The Green Revolution.’ This revolution greatly increased the world’s food supplies by improving crop plants while simultaneously upgrading soils and growing conditions It coincided with the mechanization of farming, and the worldwide spread of graduate level, science-based agriculture education.

Borlaug and his colleagues, using their ‘miracle Mexican wheats’, bent the arc of history. Their wheats and policies prevented what would have been a disastrous epoch in human history. An epoch that would have seen tremendous human mortality from diseases related to malnutrition and death by outright starvation. Their efforts saved many lives and averted massive social and political upheaval. They brought prosperity to areas of the world heretofore considered hopeless.

The 1970 Nobel Committee chose well. Borlaug was at once a plain spoken farmer and a brilliant scientist who acted with insight, intelligence and fierce determination.

Young scientists working with and for Norman Borlaug in the Mexican wheat program found it was very demanding, challenging, but ultimately rewarding. Working for and with Borlaug was sometimes described as, "simultaneously being in the Peace Corps and in a Marine Corps boot camp.” What young scientists learned was the urgency of their mission to help feed the world. Then on a practical level they learned that wheat waits for no man or woman. When wheat flowers are ready for cross breeding you work from sun up to sun down, because the window of opportunity rapidly closes.

Borlaug believed that science should serve humanity, but realized there was a planetary limit on population. He thought everyone born had a right to food, but was very concerned that human reproduction would outstrip our capacity to feed ourselves. He often referred to the exponential human birth rate as ‘The Population Monster.’ 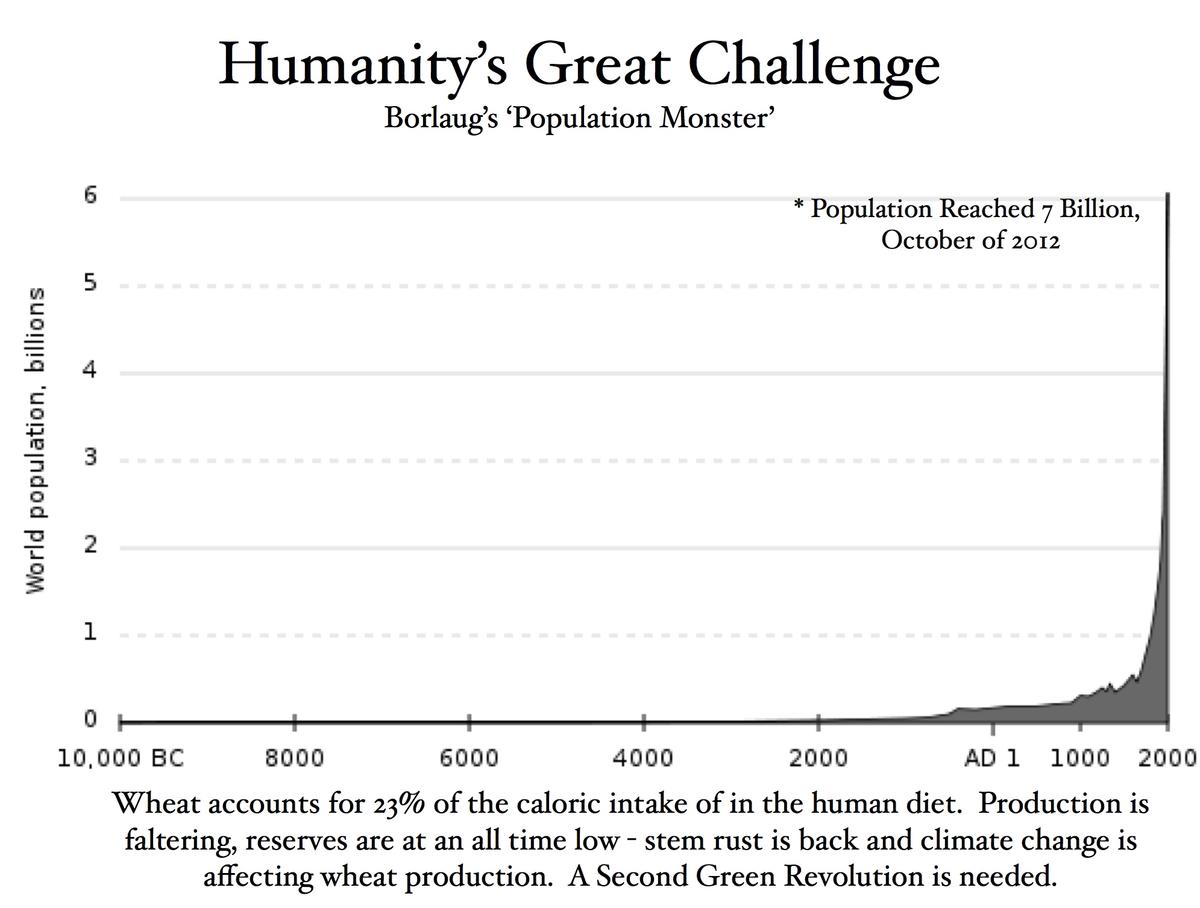 He believed deeply in education and that education should be a global priority, especially the education of women. He was also concerned about pollution, the preservation of wild areas and maintaining genetic diversity of plant species. His messages to the world were a balance of enthusiasm and caution.

To this day, I enjoy nature, the luxury of undisturbed wilderness, forests, mountains, lakes, rivers and deserts and their wildlife. But I also know that the greatest danger to their perpetuity is the pressure of human population.

Norman Borlaug was truly a peaceful revolutionary. He possessed the wisdom to master political subtleties while balancing benevolence with assertiveness. Working in the field he led by example, and had a wry, earthy sense of humor. In private he could be very direct, especially when dealing with politicians and policy makers.

Although little known in affluent countries, and especially in the United States of America, Norman Borlaug was very famous and a much beloved figure in developing and overpopulated nations. He was a trusted advisor to scientists and governments and a great friend to farmers worldwide. He used his fame and his voice, not for personal gain but rather to speak for those who have no voice, the rural working poor.

His passing in 2009 left a void in many hearts and lives. Multitudes of people considered him their great friend. Moreover, he had the respect and admiration of many nations. To honor him in death, the flags of 24 nations he impacted fly permanently over his eternal monument outside the city of Obregon, Mexico.

Norman Borlaug was fond of the University of Minnesota. He appreciated the many opportunities the University had afforded him, he returned often and inspired generations of students, faculty and staff. Generations of University of Minnesota graduates joined Borlaug and served in various capacities during the Green Revolution. Nowadays many in Minnesota honor his legacy and are inspired to continue his work. They now join in a much needed second Green Revolution.

To respond to never-ending local, regional, national and international plant health needs, and to honor the legacy of Norman Borlaug and his University of Minnesota colleagues and collaborators, the Plant Pathology Department created the Stakman-Borlaug Center for Sustainable Plant Health (SBC). The center’s mission is to inspire, educate and train today’s and tomorrow’s hunger fighters for their roles in protecting the crops that feed us all.